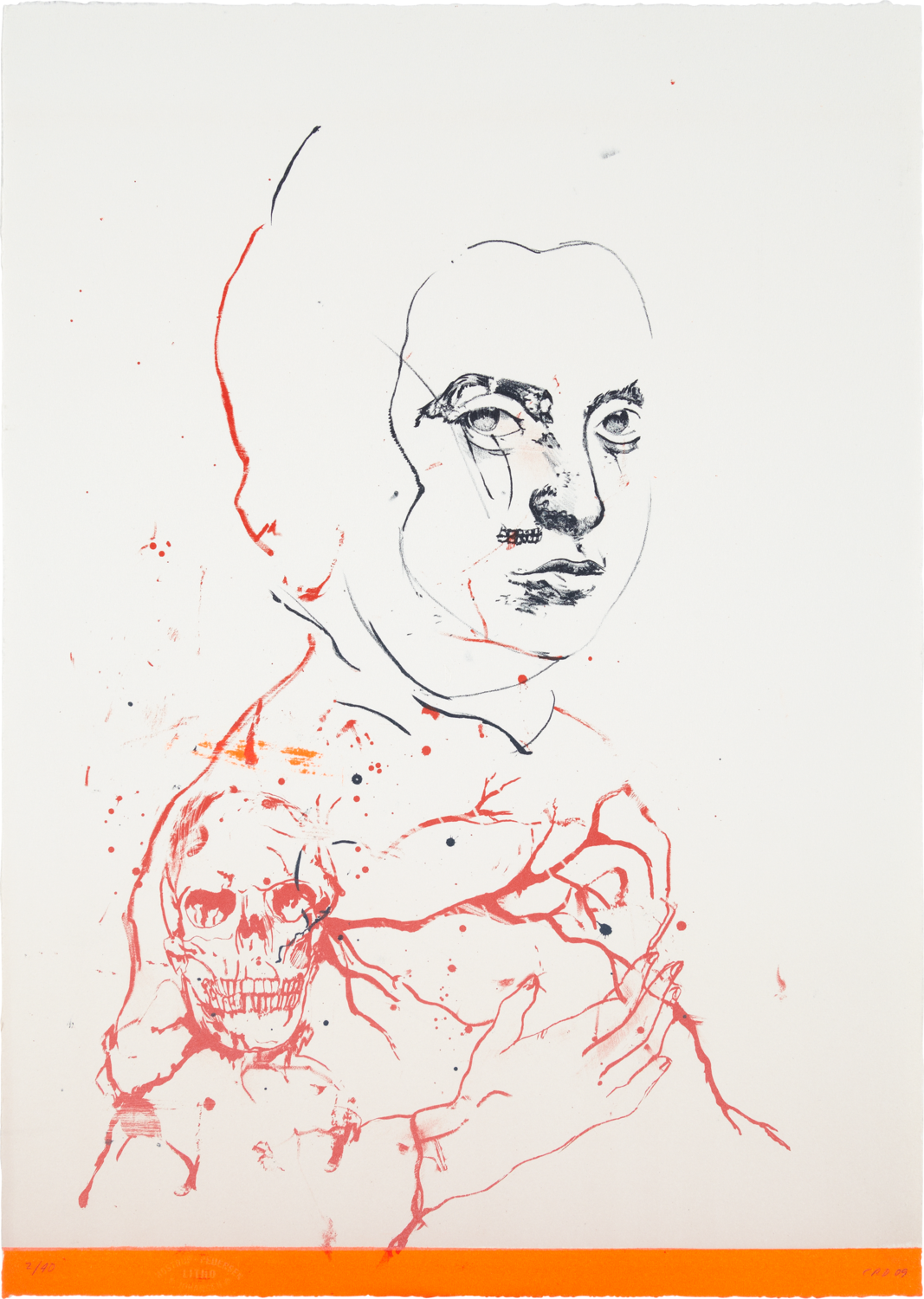 The Secret Language of Art by Camilla Jalving

“When you create art, there doesn’t have to be a clear logic. Anything can be done, and that’s what’s liberating about it,” says Cathrine Raben Davidsen, when we meet on an early June day in the printing shop Hostrup-Pedersen & Johansen in Valby. We sit among lithographic stones and the still half-finished prints that are set up along the wall. These are what we are here to talk about – the lithographic series of a total of five sheets that are to be finished here in the course of the next few days. It becomes a conversation that ranges wide – from Greek mythology and the English writer Virginia Woolf’s novels to contemporary British art and then of course Cathrine Raben Davidsen’s own praxis, which weaves in and out of it all as the cohesive glue between then and now.


The remark that anything can be done in art comes at a point when the conversation has moved on to the film work in which Raben Davidsen has been involved recently. As she says, making a film can be a frustrating experience, because it takes place in the real world. That is, where the practicalities rule and not everything can be done – as opposed to in the drawing, the etching, the lithography, the serigraphy, the painting, or – as something quite new – in ceramics, which are some of the media Raben Davidsen has worked with. In these it is only the artist’s own imaginative and representational abilities that mark out the limits for the images that can be created and the narrative that can unfold. In that way the language of art differs from the language of the everyday world. Its space is a different space with other rules and logics.


Fragmented identities
The new series of lithographs bears the title The Secret Language. In the light of the above remark, it is an apt title, for the secret language is in fact the language of art. It is a language that deepest down is non-verbal, and which therefore unfolds in the line, in the colour, in the emergence and disappearance of the motif. It speaks, but without sound. “What interests me in my works is homing in on what is difficult to say in words,” as Raben Davidsen tells me while we look at the row of still-unfinished prints. The secret language is also the language that the writer Virginia Woolf invented to communicate with her little niece Angelica.

The connection with Woolf is not coincidental, for it is precisely Woolf as writer, person and icon who is the pivotal figure in the lithographic series that is coming into being.
On the prints in front of us a number of faces have been drawn, marked out with simple, precise strokes. Most of them are recognizable as clear female faces, several of them with Woolf’s striking features – the large nose, the melancholy gaze. But there are also more masculine faces among them and faces which with their indeterminate gender appear androgynous. Several of the faces overlap, others are drawn into one another, so it is hard to define the precise contour of each individual. In that sense the faces, these women, men and androgynous beings, appear as composite identities: creatures that are in the process of either becoming or dissolution, or in between these two stages – in transformation. It all depends on the eye that sees.


The artist as interpreter
The eye that sees will perhaps also begin to look for an Orlando, or a Mrs. Dalloway, among the many faces. And perhaps they are there, perhaps they are not. Again it depends on the eye that sees. But the fact is that the relationship between the literary model and Raben Davidsen’s lithographs seems more associative than illustrative. More interpretative than referential. The title of the series may well refer to Virginia Woolf’s universe, but the individual prints do not illustrate actual novels. What is depicted is Woolf as a narrative principle. It is the idea of the many layers of meaning and many voices known from her novels, where the narrative approach is often fragmented, divided among several personae, as if the author were all of them and none of them at once. Thus the many faces whose doublings stress the processual emergence of the individual, and the fact that it is never only ourselves who speak, that there are many voices that speak through us. And thus the overlapping contours that insist on the individual’s connectedness with other people and other times, appearing simultaneously, side by side in this ‘now’.

The artist as narrator
The artist as interpreter is in this case also the artist as narrator. For this if anything is what preoccupies Raben Davidsen. Narration. In images of course, rather than words. Many others among her artistic contemporaries have the same concerns. The difference is that whereas many of them take their starting point in their personal histories, in popular culture, in romances of their own invention, or in political reality, Raben Davidsen, as we have seen here, takes hers in literary history. Or, as in her major picture series White Ink (exhibited at Horsens Kunstmuseum in the spring of 2008), in Greek mythology, inasmuch as Raben Davidsen gives us glimpses of Ovid’s ancient Greek myth of the sisters Philomela and Procne in atmospheric individual images that quietly express the bloody drama in the sisters’ faces, bodily postures and interrelations.

That the story – or the word – plays a crucial role in Raben Davidsen’s artistic process, is also evident from the detailed ‘mind maps’ she plans before she goes to work drawing or painting. These map out the main figures, their internal relationships, the plot of the story, and the associations that working with them generates. In reality these mind maps are indicative of Raben Davidsen’s praxis in general. Precisely because they are based on a cyclical, associatively leaping narrative structure rather than a linear one that begins at the beginning and ends at the end.

Discreet sampling
Perhaps this concern with the mythological and literary is due to Raben Davidsen’s educational background, which began with a year studying theology, followed by art studies in Florence, where she learned traditional virtues like life drawing. Of course that was quite unfashionable when she was admitted in 1996 to the Royal Danish Academy of Fine Arts in Copenhagen and had to relate there to quite different conceptual and far less craftsmanlike strategies in the field of art. So there was no shortage of criticism when the professors had to evaluate her narrative and figurative style, which was so infinitely far from the artistic tenor of the times.

But that was then. Today the tune has changed. This is partly because the narrative style gained a wide foothold in contemporary art precisely around 2003, when Raben Davidsen graduated. Suddenly it became fashionable to tell stories – literary, mythological, imaginative. But it is also because Raben Davidsen approaches the literary and mythological models with a decidedly contemporary sensibility that makes her works anything but old-fashioned. For although her formal idiom is figurative in the classic sense, and although she takes her cast of characters from nineteenth-century portraiture and artists like Singer Sargent and Ingres, there is something unambiguously contemporary about the expression. This is due to the mixture of precision and searching in the line. It is due to the sometimes quite unexpected use of colour, where a bright yellow suddenly lights up a neck or appears as an independent, abstract area of colour. And finally it is due to Raben Davidsen’s discreet sampling of literary and art-historical references mixed with contemporary postures and aesthetics, as we know them for example from today’s fashion photography and clothing design. This makes it at once both very old-fashioned and very modern. And that is no contradiction, for in art, yes, anything can be done. Cathrine Raben Davidsen does it. Delicately and quite phenomenally.