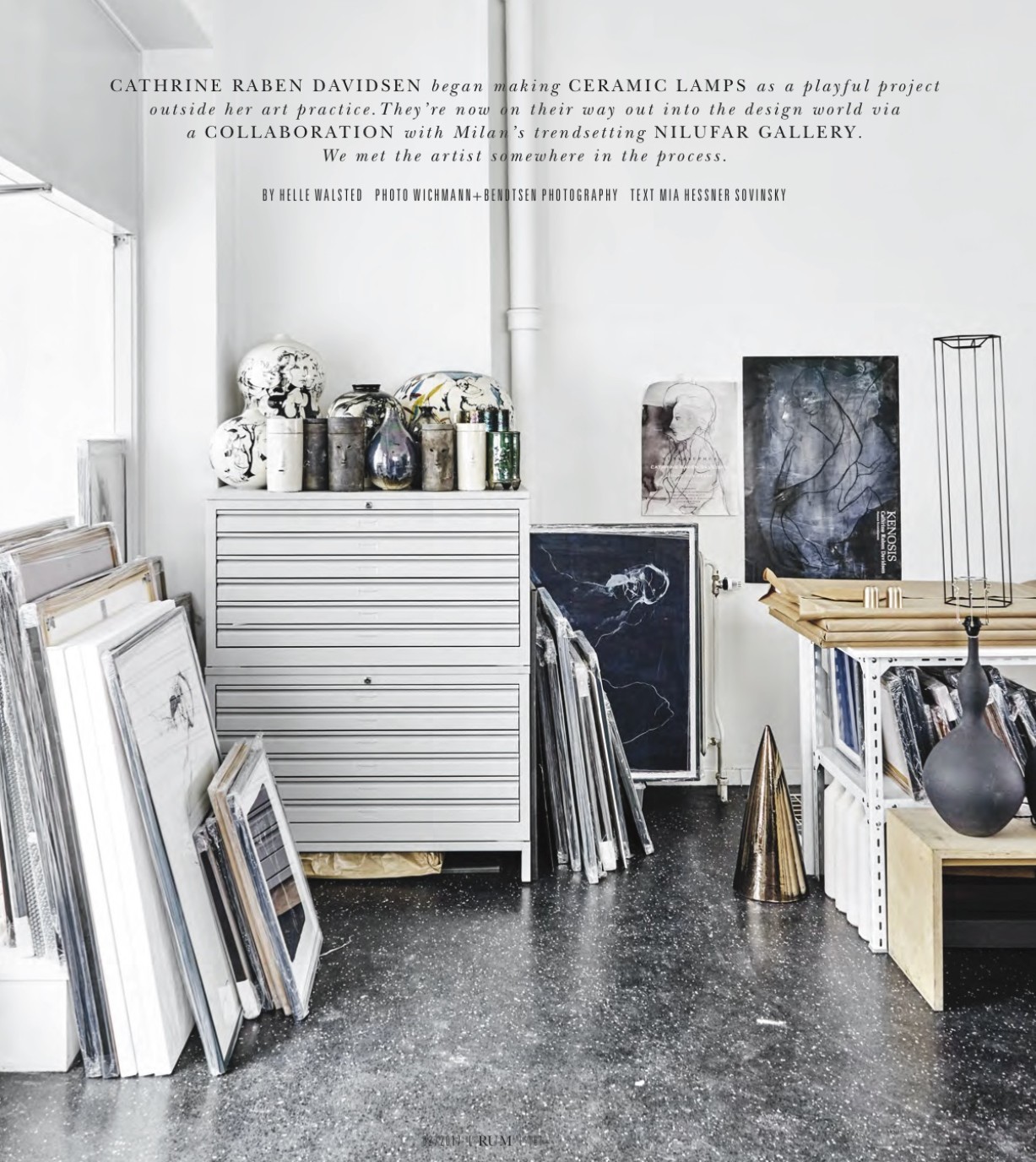 outside her art practice.They’re now on their way out into the design world via

We met the artist somewhere in the process.

Prototypes. Experiments. Artist Cathrine Raben Davidsen’s studio is filled with lamps. On the long work table beneath the window where she sits are handmade shades using silkscreened prints, and ceramic bases, matt, smooth, and patterned, side by side like little sculptures – some small and chubby, others tall and cone-shaped. In a corner are two large, floor lamps that are still being worked on. Their ceramic bases are glazed bronze, and when you get close enough, you can see a fine crackle.

I dream in lamps, Cathrine Raben Davidsen jokes  when RUM pops by for a talk  on a cold day in January. A talk about her collaboration with Milanese design guru Nina Yashar, the woman behind the trendsetting Nilufar Gallery, which will result in a small, exclusive collection of floor lamps and unique ceramic vessels.

It is a rather different kind of process for the artist who’s used to the solitary nature of drawing and painting. For the time being, headphones and ­canvasses have been replaced with a phone that keeps her in contact with a small team of skilled artisans. The blacksmith who made the  lamp stand of solid bronze calls with an important message. The fabric supplier calls to give a heads-up on the 12 metres of bronze woven wire mesh her assistant needs to sew the lampshades. Everything is made by hand individually for each lamp.

The bronze coloured floor lamps are going to ­Milan’s annual design event in April where they will be shown to the huge international audience that each year converges on the city to seek inspiration and spot talent. They are the result of more than six months of work and three visits to Nina Yashar in Milan.

We’ve been working on this project since August and it has really tested my patience. We quickly discovered a number of challenges and obstacles – just finding out how to construct a frame that fits the shades. It has really taken a lot of time, because we depend on so many people through the entire process, and I’m not used to that at all. I’ve had to learn that. Now I understand  why a design process may take years. When I work on my paintings, I don’t have a template, and that’s awesome – I’ve realised that much in this very ­different ­process. When I paint, it’s just me and the works, says Cathrine Raben Davidsen.

The collection for Nilufar Gallery is the provisional culmination of Cathrine Raben Davidsen’s ceramic adventure. Only 18 months ago she made her first lamp collection exhibiting it at The Apartment design gallery in Copenhagen. That has opened the doors to the upper echelons of the design business.

At the time I thought it would be fun to do something that could be used, something functional. Not just art to look at and contemplate. The lamps began as a playful, lighthearted kind of project, and I had no expectations it would amount to anything major, and then I’ve just seized the opportunities that presented themselves along the way. I think perhaps that attitude paved the way, says the artist, who one day, prompted by people who had seen her collection, sat down and wrote a letter to Nina Yashar attaching her exhibition catalogue. That was during design week in Milan last year. She received a standard e-mail reply stating that Nina Yashar was busy, but would look at the material at a later date.

A couple of weeks went by, and then I got a mail from them, asking if I could come to Milan. I was totally taken aback, says Cathrine Raben Davidsen.

Although working with ceramics is new to her artistic oeuvre her interest dates back many years and was heightened by trips to Mexico and Japan.

I’m very much inspired by Japanese firing techniques, where it’s all about the process and the things that might happen with the glazing. That’s also reflected in my more recent drawings and paintings. Over the past two years I’ve  focused on materiality and tangibility and experimented with materials, which together create a chemical reaction. It’s a process that can’t be controlled, and I like that. It’s the same when I work with the glazing for my ceramic objects. I haven’t trained as a ceramicist, and glazing is something I’ve taught myself to do, so a lot of mistakes happen, but they’re beautiful mistakes and imperfections. In Japan they think that something divine has blown on the ceramics when little bubbles appear or the glaze has run in places, she says.

She and her husband, Jens Lindegaard, have a raku-oven in their country house in Sweden, where they burn their own ceramics.

There’s a crazy amount of technique involved, and Jens is extremely good at it.

For the first time in their 18 years together, her husband has joined one of her projects as co-designer on the Nilufar collection, the artist says. They met Nina Yashar as a couple the first time.

I think Nina thought it was interesting that Jens is an ophthalmologist and I’m an artist. I told her that I’m neither a ceramicist nor a designer. I don’t perceive myself in that way. For me, it’s more of a sculpture than a lamp we’re creating. It’s an entire universe we make. If it hadn’t been for her, we would have never taken this on. Nina Yashar calls herself a talent scout, and that’s what she’s into. For her it’s a very personal process to find new designers, and it’s something that she really loves and cultivates. Each year she brings in some complete unknowns. It’s a big gamble on her part, says Cathrine Raben Davidsen adding:

As an artist I think it’s about not being afraid of doing it. Several painters and artists have taken a chance with furniture design. It’s easier for artists to enter the world of design than the other way around.