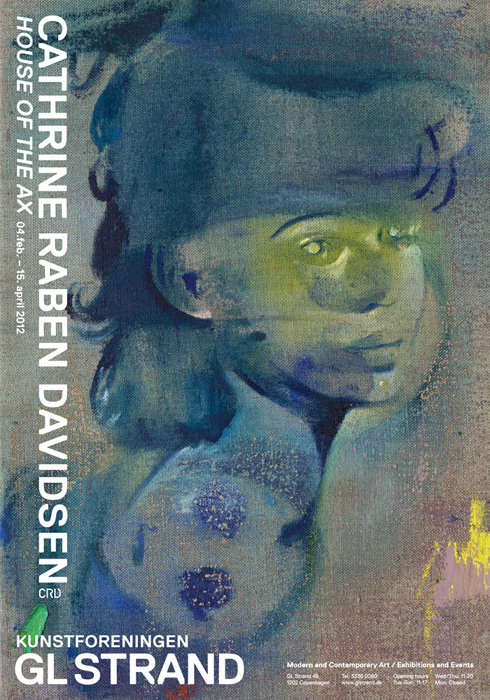 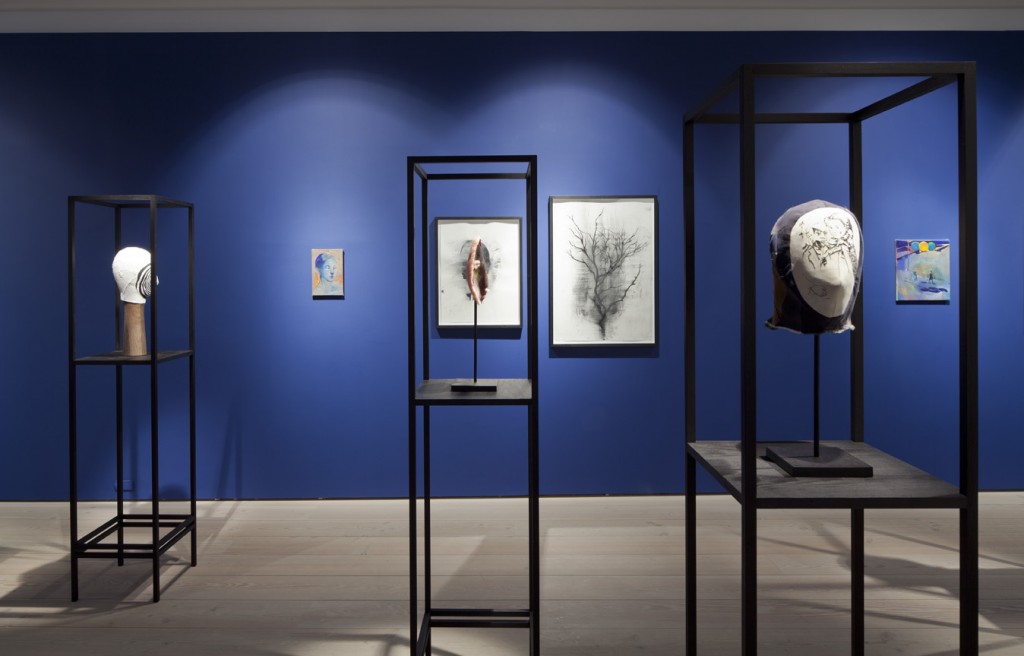 Cathrine Raben Davidsen (b. 1972) is known for her painterly personifications where she balances minutely detailed line drawing with dissolved, blurred contours and intense patches of color. In her works she draws on a wide range of literary and art historical references, narratives and mythological material. In her new works, done specifically for the exhibition HOUSE OF THE AX, Raben Davidsen strikes more intense, dramatic note than hitherto. Rather than the earlier so characteristic pastels and bright neon shades, the colours are now saturated and the brush-strokes firmer. The choice of materials ranges wide, from monumental charcoal and ink draw­ings, ceramics, prints, and small oil paintings on linen to embroidered fur masks and sound.

Material from personal memory in the form of pictures from the artist’s journeys or of family members form part of the exhibition on an equal footing with the many references to art history and mythological narratives. The audio aspect, which consists of the mechanical whirring of her father’s sewing machine, has associations going back to the artist’s childhood and her father’s work as a fashion designer. The exhibition thus takes on the character of a sampling, where various impressions appear side by side across time and space. 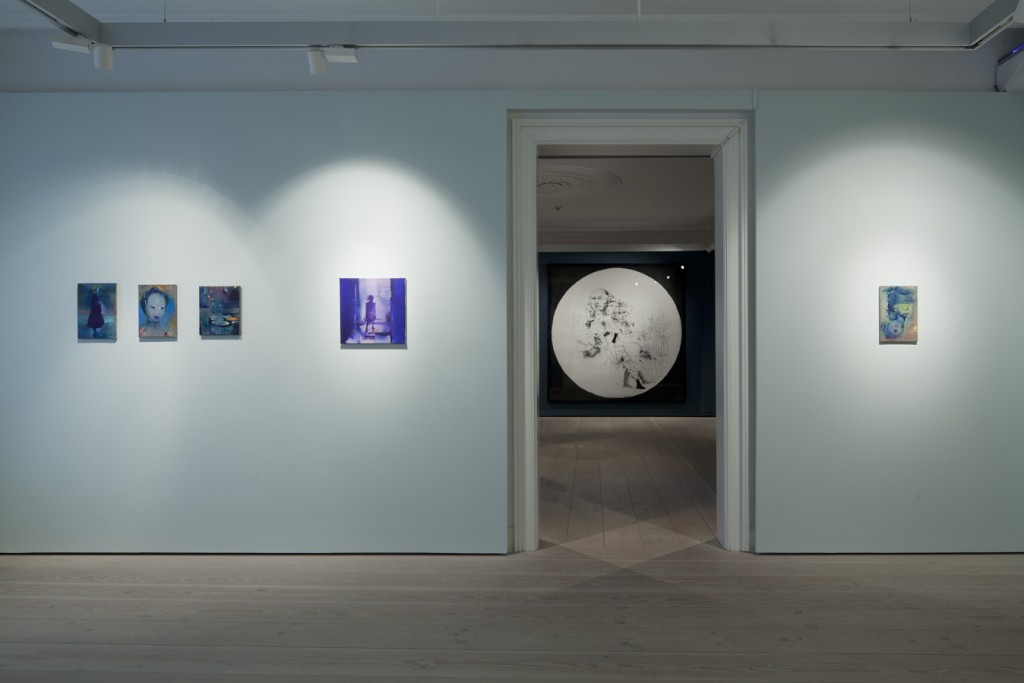 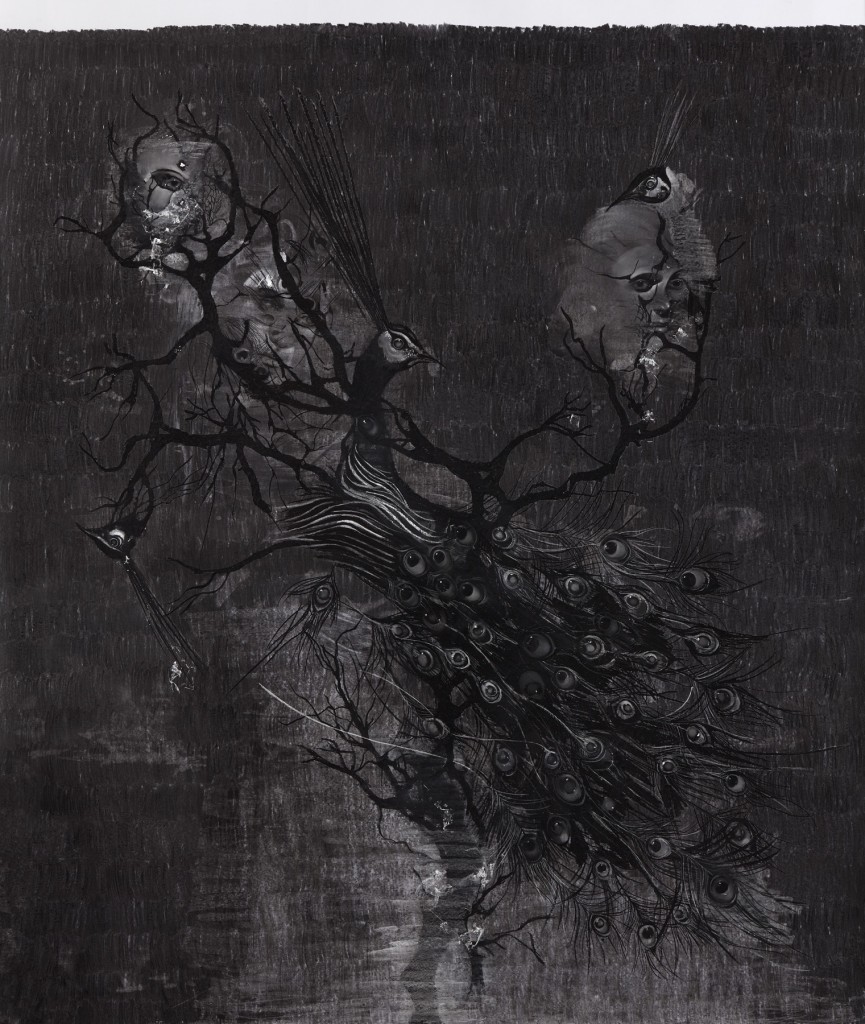 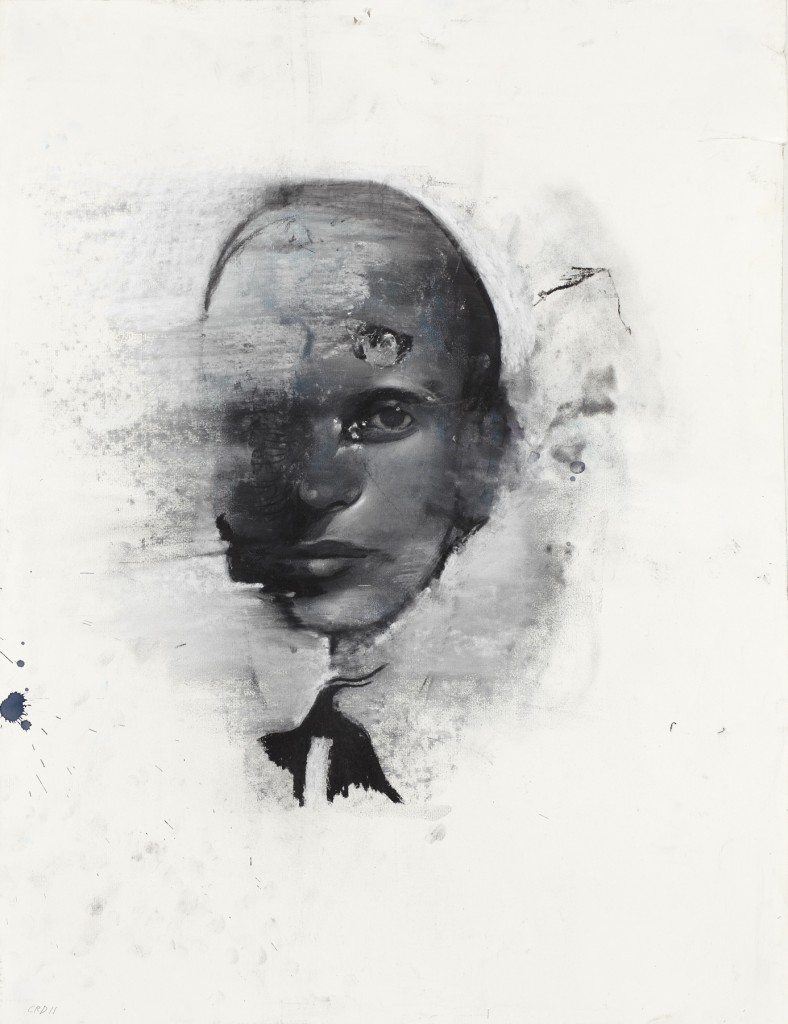 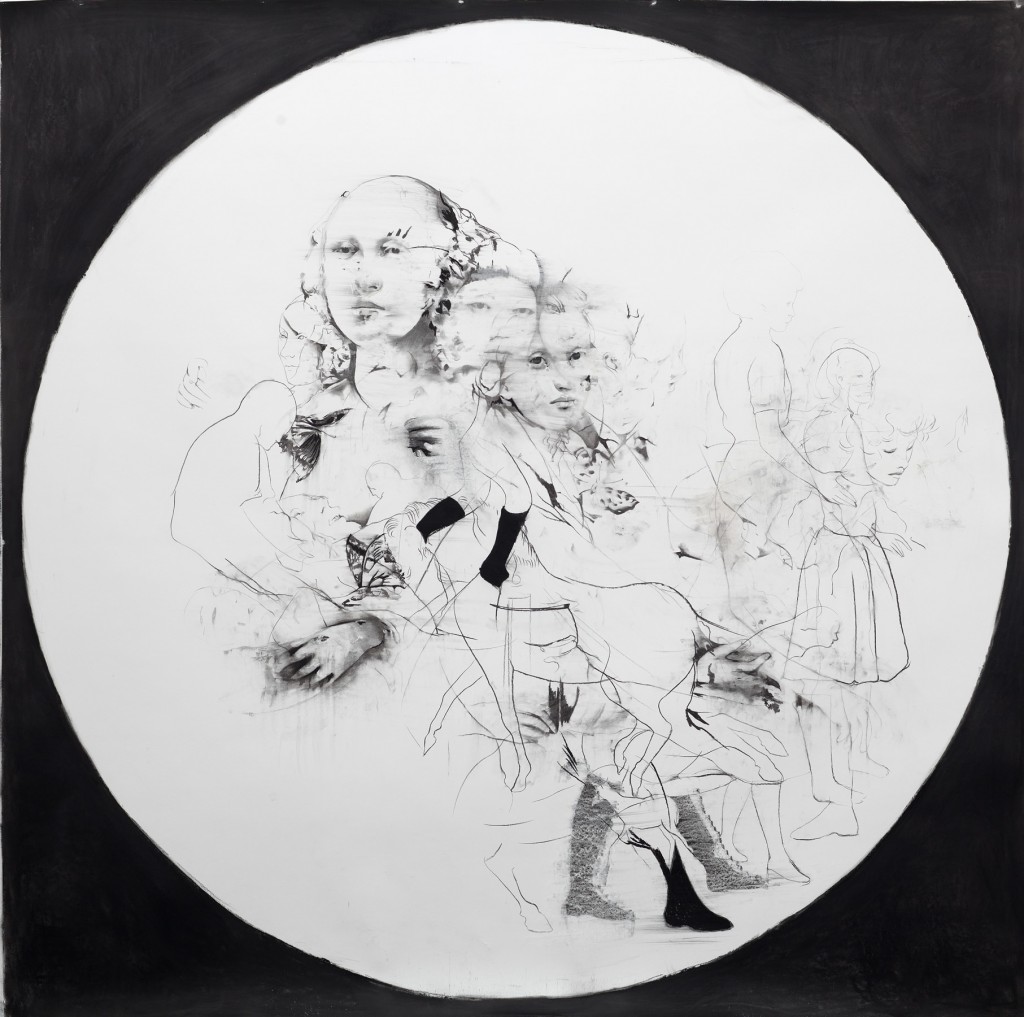 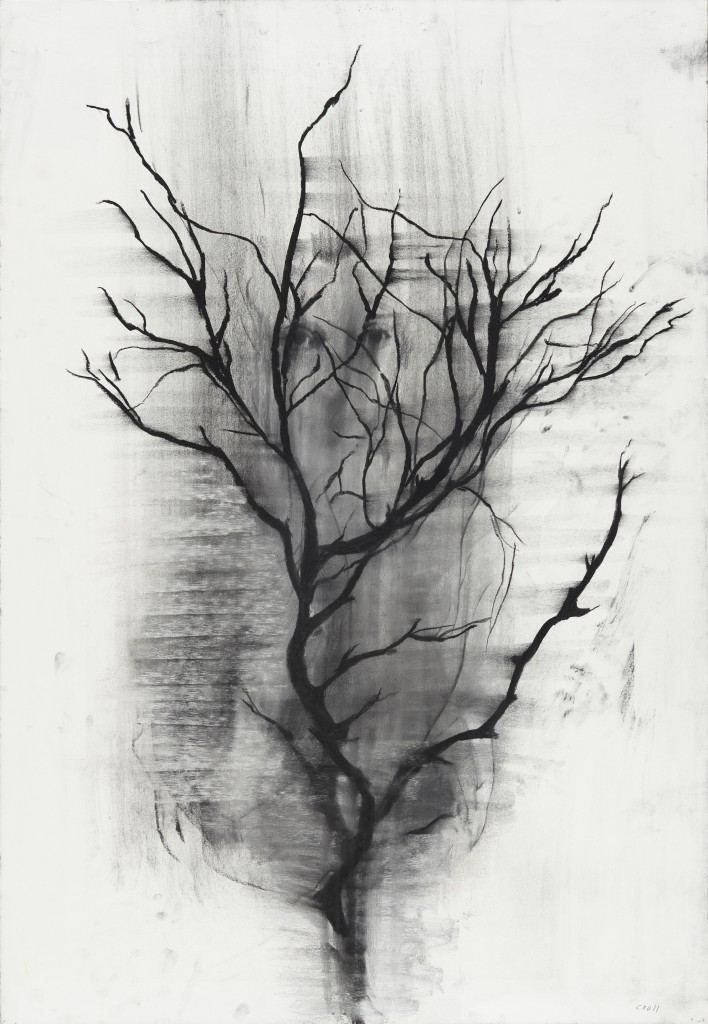 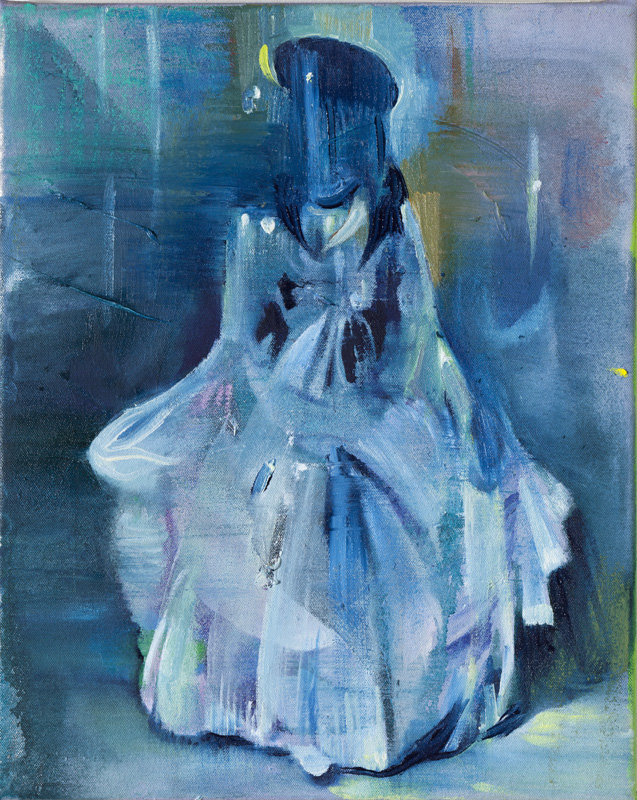 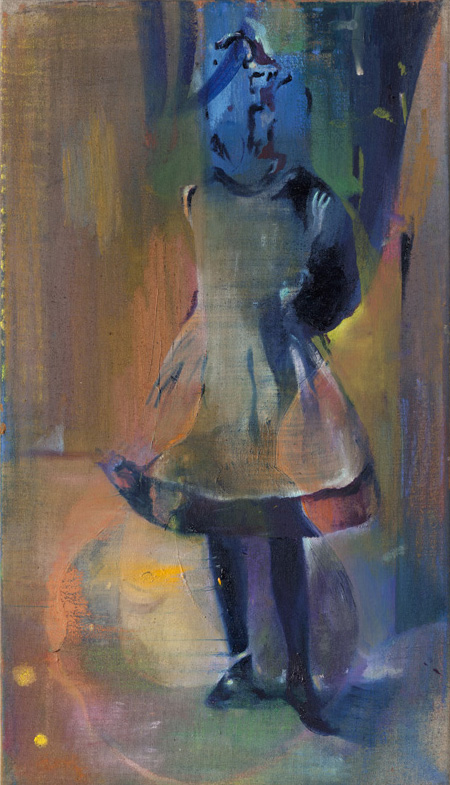 For me the theme of transformation is something that affects everyone. In one way or another, human
beings are constantly in a process of transformation. Events that impact on our lives, the transition
from child to adult, the relationship with our parents and children and with the world, all colour us
and change us and make us into the people we are.

Cathrine Raben Davidsen is concerned with human destinies, with transformations and transitions,
and with the journey from one place to another or from one state to another. Her works show objects
and people caught in a snapshot-like image or in the midst of a transformation process: balls suspended
in the air and faces that appear partly obliterated. In the drawings the fine contour lines intersect
with the outlines of other figures, while the thinly applied paint reveals older layers and over-painted
motifs. Her figures and people are composite in more than one sense: the usual parameters of identity
such as gender and age are not immediately evident; rather, we often seem to see androgynous or
animal-like beings outside time and space. The faces have an enigmatic, even mask-like character that
gives the impression of concealing a different face or perhaps even more masks or layers that can be
peeled off ad infinitum. The nature of the mask seems to be precisely that it questions
identity, or to put it differently, wearing a mask means no longer being oneself.

The triumph of the mask

Originally the mask was a ritual object used specifically to mark transformations or transitions in
the seasons and in life. But with the breakthrough of modernism and the avantgarde, the mask became
more a sign of a grotesque and distorted reality. At the same time it became an image of the modern,
complex individual whose identity becomes increasingly difficult to define. The new interest
in ‘primitive cultures’ and in the mask as representation that arose in the post-war years is
explained by the art theorist Walter Sorell as follows: “The mask returned, reflecting and revealing
the savage instinct of man let loose again, the old demonic spirits in new clothing, the spirits man
feared and tried to escape while falling prey to them. The mask triumphed in leading man back to its
cruel sources, and projecting its influence with a sophisticated gesture, often hiding as a mask behind
non-mask-like masks”. Cathrine Raben Davidsen’s works use the mask as a marker of an existence in
eternal transformation, but also as the sign of a self that can never be captured or defined.

The mask and the myth

In House of the Ax the mask motif is quite specific in the work Ariadne’s Thread; a group of finely
worked, hand-embroidered masks in dyed mink fur and cowhide, theatrically lit and exhibited in open
display cases. The title comes from the myth of the labyrinth of King Minos at Knossos, whose passages
were the haunt of the chimeric Minotaur. Ariadne, the daughter of King Minos, gives the Greek
hero-king Theseus a sword and a ball of yarn so he can conquer the beast and use the thread to
find his way out of the labyrinth again. After killing the Minotaur, Theseus takes Ariadne away with him,
but later abandons her on the island of Naxos. Ariadne is beside herself with grief and anger when she
sees Theseus’ ship sail away from the island and thus discovers that she has been deserted.
Like the duality of the Minotaur, who is at once bull and human being, there is a fascinating duality
in the fur masks, which appear animal-like by virtue of the chosen material, but at the same time mime
the human face. Cathrine Raben Davidsen has used mythological material throughout her artistic practice,
and the mask motif seems to be a natural extension of the mythical, since the mask, like the myth,
expresses universal human emotions, instincts, longings and even repressions. It shows us our ancestors and gives form to ‘the beyond’, and for millennia it has found a use as an object with which we tie past and present together and create a sense of historical continuity.

In the same way past and present are linked in House of the Ax, where memory fragments and old
photographs feature on an equal footing with mythical material and fables. Cathrine Raben Davidsen
alternately conceals and reveals, and not only with the aid of the mask: sometimes the silhouettes
are so unidentifiable and the dissolution so total that you get a sense of seeing the subject in strong backlight or of standing before something that has faded and been eaten up by time. There is an almost archaeological interest in what was, in layering – quite concretely in the painting as process, but also in human identity and the multiplicity of stories with which we narrate and explain ourselves.

Like the mask, thread is a recurring motif for Cathrine Raben Davidsen. Thread is used in works
and titles as a metaphor of narrative and of women’s right to express themselves, but also as an
image of feminine resourcefulness and persistence. This is the case in the myth of Ariadne, but
also in Ovid’s tale of Philomela – an earlier subject for Cathrine Raben Davidsen – who gets her
voice back when she weaves into a tapestry the tale of a terrible crime committed against her by
her brother-in-law King Tereus. In House of the Ax the thread, or the act of sewing, is used as
an element in the audio part of the exhibition, which consists of among other things of the
mechanical whirring of her father’s sewing machine. The sound recalls the artist’s childhood and
her father’s work as a fashion designer and is mixed with echoing, cave-like sounds and a confusion
of street noises. Again different temporal dimensions meet, the past is interwoven with modern life
and the gaze looks both inward and backwards towards childhood but is at the same time turned outward to the chaotic flicker of the world and human history.

The use of intertextuality is a general device in Cathrine Raben Davidsen’s work, which to a great
extent draws on associations with mythology, literature and the history of art. Her works have the
character of samplings pieced together from oral narrative tradition, folklore, tragedy, mythology,
art-historical quotations and personal recollection. At the same time the works move
between the poles of the unconscious and the conscious, between dream and reality.
By drawing on a wide frame of reference Cathrine Raben Davidsen breaks with the idea of the grand
narrative or truth and instead presents a number of interpretations and readings of human existence,
which can in principle be endlessly retold and re-interpreted. However, certain elements taken
from among other sources myth and tragedy involve universal, fundamentally human emotions like passion, doubt, powerlessness, the sense of loss, desire, instinct, jealousy and love. In this Raben Davidsen constantly balances the great universal narrative of mankind against the small narrative of the individual lived life.

Cathrine Raben Davidsen produces wondrous images of people and identities in eternal motion.
In her works she gives us a modern, diverse world where the great truths are absent and where
identity or reality cannot possibly be pinned down. This modern exisistential issue is expressed in the questions “Who am I?” and “Who are you?”, and is clearly manifested by the use of the mask as an image of the ultimate game of identities.