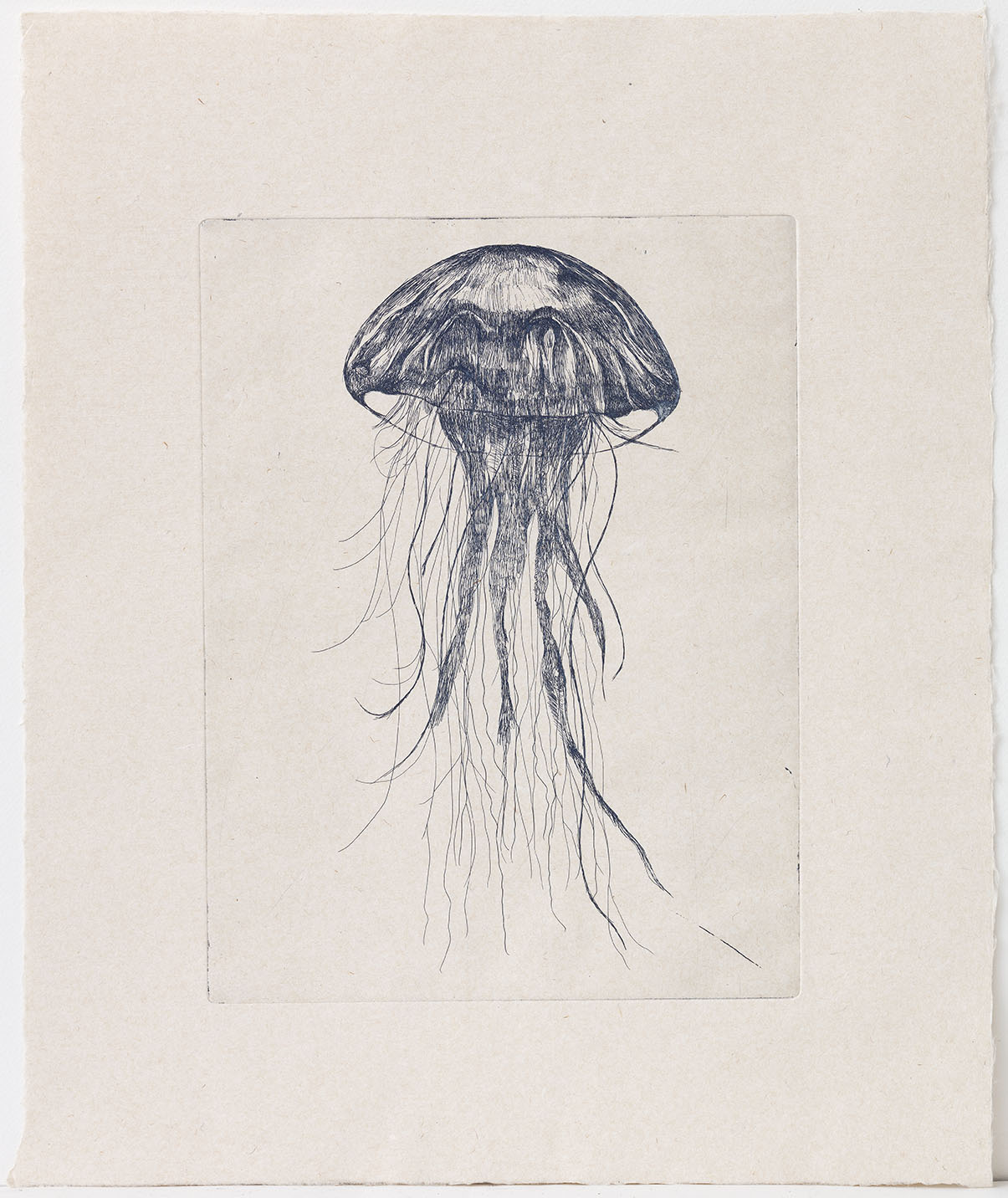 Cathrine Raben Davidsen is a multi-dimensional artist. Working in a variety of media, she has developed and refined an instantly recognizable personal style over a career of nearly 30 years. Raben Davidsen moves effortlessly through time and space – between myth and history, light and darkness, reality and fantasy. From prehistory to the present, human challenges and universal dilemmas are her preferred subject matter. While the final product may vary widely, the starting point is always the same: graphic art. Lines. The written word or the drawn line. But mainly the former, even if it ends up as a visual narrative embodied in art.

Raben Davidsen’s work in printmaking has long since become a fundamental and essential part of a multifaceted practice that she characterizes, cultivates and celebrates as eternal study. In fascination with its techniques and curiosity about its manifold expressions, printmaking has become an inexhaustible source of inspiration. Often, it is through the printmaking process that she finds themes for subsequent paintings.

Over the years, Raben Davidsen has produced a prodigious output of more than 400 prints – etchings, lithographs, woodcuts, monotypes and monoprints. This body of work is now presented for the first time in a major retrospective exhibition of prints spanning Raben Davidsen’s career as an artist. The present volume, published in conjunction with the exhibition, lists and illustrates her prints from 1998 to the present.

As museums with significant collections of prints, it is a natural fit for us to engage wholeheartedly in spotlighting Raben Davidsen’s prints. It is quite unique to see a contemporary artist of her talents explore printmaking so comprehensively. In a conversation conducted for this book, Raben Davidsen and art historian Marie Laurberg open a window into the thoughts, impetus and choices behind her work.

Raben Davidsen notes the generosity of printmaking as one of the most important parameters for her longstanding devotion to the medium. Despite her years of practice and skilled partners at print studios, the nature of printmaking inherently involves an element of “blind creation” or “writing between the lines,” as the artist puts it. Using all the tools available to her, Raben Davidsen cross-pollinates form and content in her artistic expression, juxtaposing the differences between printmaking techniques. In the grey zone between the controlled intimacy of etching and the potential wildness and voluptuous lines of lithography, an unknown and alluring world lies wide open.

The conversation with Laurberg also casts a light on what we might call Raben Davidsen’s own version of the graphic connection between words and images. From very early on, writing has been an aesthetic tool for the artist, as manifested in the spectacular and expansive, densely written mind maps featured in this show that lie at the root of her practice. The mind maps also aid our understanding of Raben Davidsen’s process and, equally important, the sources of her inspiration that can be found across the history of art.

We are deeply grateful to Marie Laurberg, who devised and conducted the insightful and illuminating conversation with the artist.

Thanks to the staff of CRD Studio for their omnipresent assistance in all matters great and small. Thanks as well to the Danish Arts Foundation and the Gangsted Foundation for supporting the exhibition. Last but not least, we warmly thank Cathrine Raben Davidsen for her fantastic engagement and collaboration in bringing this publication and exhibition to life.

by Museum Director at The Kastrupgaard Collection, Mette Sandhoff Mansa